In the months of January and February, students in Groups 2 and 3 in Monotheism and The Middle East course studied Islamic history and literature. Students read poetry by Sufi poets Rabi’a al-addawiyyah, Rumi, and Hafez, and reflect on the poetry’s mystical themes of divine love, separation, the self, self-annihilation, asceticism, and transcendence.

Students then wrote poems about how the global pandemic has shaped their thinking about one or some of those mystical themes, and illuminated those poems based on the four main elements of Islamic Art -- calligraphy, geometric patterns, stylized floral & organic motifs, and figurative art -- which were introduced during Geometry classes and All-School Meeting by artist Samira Mian.

Samira Mian, a London-based educator and artist with a passion for Islamic Geometry, was a Waring Artist-in-Residence in January. A former middle school maths teacher, she works with compass and straightedge, watercolors, and handmade paper to create beautiful paintings inspired by geometric patterns found throughout the Islamic world.

Samira taught geometric construction with 8-fold symmetry to our Geometry students. Students appreciated her warm, lighthearted manner as she led the group through a remarkably complex series of steps with simple, mechanical tools. Students surprised themselves with the work they managed to create in just half an hour. The pure engagement and joy that pervaded the experience was captivating. This exercise - which on the surface might seem to be all about precision and rigor - allowed the impressive talent and creativity of different types of math learners to shine.

Samira Mian, sharing her own work at All School Meeting

For the Vulnerabilities of a Mind in Silence

Warm air wafted from the entrance ahead of us,

into an indoor garden.

Revealing a scene of

For the butterflies fluttered freely around them

From flower to shoulder

To the top of an old man’s head.

Of color and movement

“But the butterflies aren’t really free,”

For there’s a roof over their heads,

Two sets of heavy doors to keep them in.

And they’ll never know of rolling fields or gnarled mangroves,

Of the habitats of their forebears.

And over a month ago there was a dismal gathering

At an intersection along Main

Where a man shed his mask

And the passengers of the cars all gestured profanely

And from the look on his face, I believe he felt as if he were

on top of the world.

As if we were all oblivious to our own prisons

and he was roaming free.

And it’s so quiet now.

Though it will never stay that way.

And in these trying times

It seems that quiet is becoming our default.

We must first unmute ourselves.

And it was quiet, like this, in the garden that day.

The wind dwindled and the leaves were at rest

Eve heard the enticing hiss of evil drawing near,

And with her companion nowhere to be found

Saw no reason to draw away.

I was always here, it said,

And you’ve mistaken me for many things:

Adam’s quiet breathing, the rustle of the leaves.

To her unprecedented guest

And Eve’s fingers trembled as she twisted

Evil’s voice buzzed in her ears,

Corrupting her free will.

And such this default silence allows us to fall into a

Vulnerable, not only to negative influence

Not only to the darkest workings of our mind

But to social sloth.

Our nation’s state of restful unrest

Has allowed us to give into,

The myth of time.

And when we no longer know what day it is

We allow ourselves to bask in it.

For our infinite “I’ll do it tomorrow,”

Our everlasting wait for a

Will shock our future selves when we wake up

For we really don’t have “all the time in the world.”

Whether we can see that or not.

I was told I had to stay home

Only the power of looking

To see a blurry image

I used to hold.

For my powerful being,

was hardly a being at all

My heart was empty,

Searching for a meaning in this

A heart that used to take

for granted the things

laid in front of her.

Now taken from her.

But as the days grew longer,

and the birds chirped a little louder.

I found myself looking

In places I’d never been before.

At homes I’d never seen before.

Out of windows I'd never peered through before.

My heart grew to understand,

and found a new home

in things that used to bore me.

I placed my mind into

A man seen something

So interesting shone through a light,

His eyes so hypnotized, he memorized

But one day, the light died.

With no source of power left,

he was forced to lift up his head.

And what he saw,

Was a world no light could create.

His mind was forced to appreciate.

having since been evicted,

crawled into new spaces, and found

“We are in this together”

A sea of I’s and me’s submerged in

As much as I miss being We,

I now believe that

And independence is the key.

For those around you can only add,

but can never fully create you.

And learn to listen.

For a bird can’t fly without a lesson.

But once they’ve left

Their wings have grown,

And on their own,

They do the most.

A nest can only keep so long,

Use it to appreciate

The things around that you can’t change.

of time to grow,

Just as the man, and I

The unlucky locked in living coffins,

blue from head to toe

for the dying to ponder.

A tube shoved into their tattered lungs,

alone and apprehensive to the end.

But here I am,

and one cup of coffee,

frothed milk with 2 shots of espresso,

the only thing to mark the day.

Thinking of what never came to pass --

regrets from an alternate timeline.

All the time I could ever ask for

yet nothing to show for it.

or to use wisely.

this is a constantly moving world

skipping and skimming over the sunlit

depths that I love

daily, I comb the pools between the boulders

for a droplet of what is new to me

for now, all the bustle has stopped

walkway from the beach

every lunch, I explore the rocks and pebbles

that litter my shoreline

searching for the same spark of sunlit rocklike formations

the tiny lumps of broken vases

thrown about the deep dark bottom

a piece of an old beer bottle

looking for that sparkle of something

foreign to the ground

yet so plentiful that I can fill buckets and jars

and a sunlit beam

stretching down to greet me

into a new reality,

where masks, and 6 feet are the new norms.

Is this the flood of a rebirth?

in an ark of confinement.

Living in a 2D world,

separated, behind a screen.

My consciousness slips away in need of

instead coming out as texts,

no emotion, no meaning.

No one knows the effects.

Cliques leaning away from one another.

Friends grasping onto friends like a mother to her newborn.

Newborn students in the spotlight with no audience.

not sure what makes sense.

What are their names?

not able to lead

Schlepping across the courtyard,

No change in scenery.

About the guest poets:

Amy Grier: writer and editor whose prose and poetry has appeared in, among others, Poetry East, eratio, Streetlight Magazine, xoJane, and the Brevity blog, and who is currently working on Terrible Daughter, a memoir.

Aaron Wallace: Poet, educator, and U.S. Army veteran whose work has been published in The American Journal of Poetry, Plume, The Deadly Writers Patrol, Typehouse Literary Magazine, and Solstice Literary Magazine. One of Aaron’s poems was named as an honorable mention in the 2019 edition of Proud to Be: Writing from America’s Warriors. 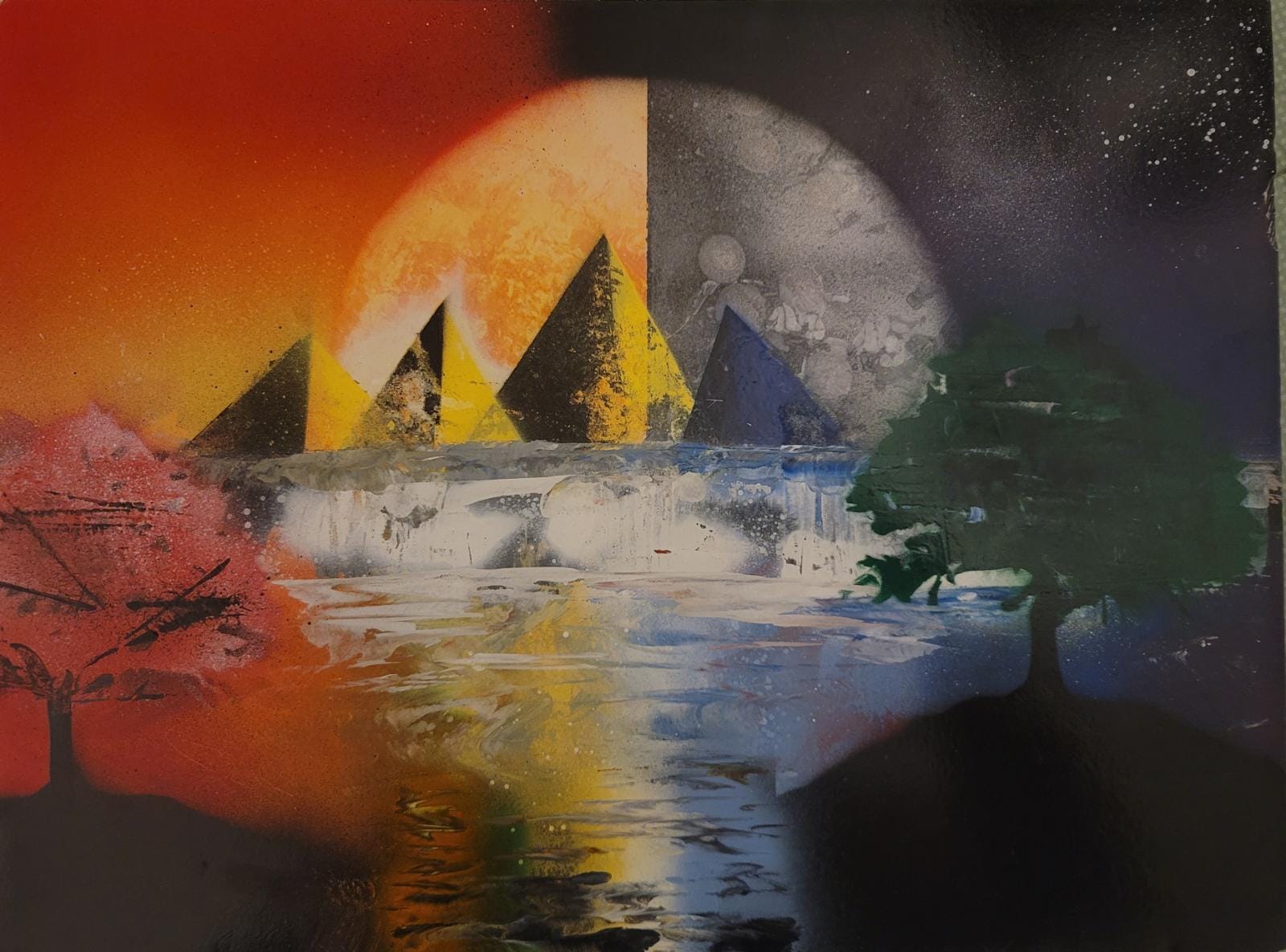 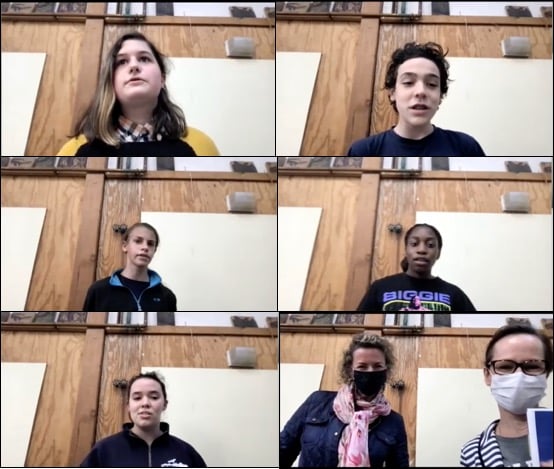