Tiffany Soucy hurries from the booth to a stage window that floats slightly askew. As she runs down the center aisle, she grabs a student to steady the windowpane so she can adjust it. “Does that look right?” she says. “I’m not the best at seeing if it’s level. Hey, Mattie, is this level?”

It was build-day in theater, and tech week was only six days away and the performance two weeks out. A lot had to be done to get Shakespeare's Sister running smoothly. As the Technical Director of the show, it’s her job to oversee the set, props, costumes, and everything in the booth. She is one of the most important people in the theater. She keeps the show running.

Now she is also one of the most important people in the school. She became the school’s Academic Administrator in August, meaning she helps maintain student transcripts, create schedules for convocation and special days, and does day-to-day planning.

“In some sense, I really am the stage manager of the school,” Tiffany says.

In other words, she keeps the school running. The job comes naturally to her, as it involves creativity in the scheduling, something she excels at in the theater. 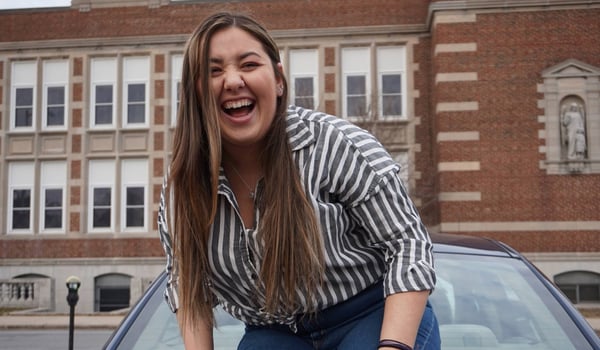 Tiffany Soucy has had theater in her life since she was in high school, but because of her stage fright, she focused solely on the technical aspect of theater, even transferring to Whittier Regional Vocational Technical High School (Whittier Tech), where she learned carpentry and acted in all four musicals, with parts ranging from a napkin in Beauty and the Beast, to Gabriella in High School Musical 2, despite her stage fright. As her Whittier Tech education went on, she was soon bored with the prospect of becoming a house carpenter, she wanted to be more creative with how she used her trade.

After her high school career, she went to Gordon College with a double major in Teaching and English. While in college, her friend took her to All Shook Up, the musical, which made her look back into a path of theater. After college, she had a variety of jobs, from a Party City employee to working at the Huntington Theatre in Boston, the summer after graduating. After her summer job, she came to Waring, just in time for Radium Girls in the fall of 2017.

Her creativity has been an asset to the theater ever since, especially in the booth when the performances start. Her role is to tell both the light board operator and the sound operator when to “cue”, among several other tasks.

Tiffany knows that as the school changes, it could change her own course, although she would love to continue to be a part of Waring for the foreseeable future.

Not only have the shows she’s designed been liked by Waring students, she is also a popular person at the school itself–in the theater and now all across campus as everyone gets to know her in her new role.