Community Writing Project - Best of Week 4 and Next Week's Prompt

Last week the prompt was: On Sunday, the New York Times published a list titled, “What Writers Say about Plague Season.” Among the quotes, was this one from Iris Murdoch: “Of course reading and thinking are important, but, my God, food is important too.” The Writing Department agrees with Iris. Please share your quarantine food stories with us. Have you been stress baking? Trying that recipe for cassoulet you’ve always wanted to make? Falling back on Mac ’n Cheese? Bingeing on salt and vinegar potato chips? Tell us a story about what food means to you right now. And, please make us taste it!

At the bottom of this blogpost, you will find this week’s new prompt. Everyone is encouraged to participate alongside our students. Please submit your responses (no more than 250 words) to Jill Sullivan (jillsullivan@waringschool.org) by Friday.

Below are five of our favorite responses from last week. Click the following links to read the best of Week 1, Week 2, and Week 3.

I suffer from debilitating panic attacks. They have crept in over the course of my life like fog rolling in off the ocean. Since January, as Coronavirus began its insidious wave across countries and continents, so too has my panic disorder. While meditation, long walks, and medication has helped to ease my full body response to fight or flight, I have found solace in The Great British Baking Show. Everything about it: the peaked white tent in the middle of rolling green hills, the wild flowers, the sheep grazing in the distance, Paul and Mary, a wonderfully motley crew of amateur bakers, fairy tale music, and what has to be the most polite competition on the planet, whisks me away to an oasis of chocolate ganache, savory breads and passion fruit cream. Yesterday, Nate turned 16, and for days, I have been strategizing the safest way to obtain ingredients for his birthday cake. It felt primitive, donned in my N95 and latex, hunting and gathering for my family, yet there in the baking aisle was a large bag of unbleached flour and 3 blocks of Guittard’s unsweetened chocolate.  Home and showered, I silently read the recipe in my best British accent. I pulled out mixing bowls and dry measuring cups, sifted flour and baking powder, dissolved sugar in water over low heat and poured it over unsalted butter and broken up bits of chocolate. The aroma that filled the house was too decadent for early afternoon. I set out to make the frosting, a recipe by the late Maida Heatter. The recipe involves mixing the frosting with a hand held beater over an ice bath, something which I’d never done. When the chocolate, heavy cream and sugar mixture didn’t stiffen, I remembered what Paul and Mary often advise their bakers - have patience. Eventually the chill from the ice bath brought the frosting together.  Homemade chocolate cake made Nate’s sweet sixteen in quarantine just that: sweet.

Last week I had a craving for bagels (like most of us do!). I had pictured it toasted with cream cheese and ham (instead of salmon because I hate fish). I went on a quick quest to the garage where we have our freezer and tried looking for a bag of bagels. But alas (!), none were there so I was stuck with a desire for bagels. I quickly took to the internet and YouTube. I had decided to make New York style bagels. There were tons of different ways to make them (including a recipe that took 3 days). I quickly found a 7 minute long video of a Jewish twenty-year-old baker showing you how to make them that didn’t take days to make! I quickly started measuring out my ingredients when I realized that I had health class in two minutes. So I continued measuring and mixing (even during class). For my next classes things went well because I was at the “let rise for an hour, punch down, and let rise again” step. I boiled them and then put them on a baking sheet, put egg wash on them so they would be golden, sprinkled sesame and poppy seeds on them and put them in the oven (for 20 minutes! - so much better than 3 days).

Once I took them out they looked gorgeous. I quickly snapped some pics to send to the fam (to brag :P). I then executed my genius idea of  cream cheese and ham and dove in!

Sometime after lying down on the couch with all of the cushions piled on top of me I decided it would be best to not think about having corona….

So while in this meditative state, and under the pressure of about half my couch I concluded that I could just stay very busy. I decided that I would fight this virus by doing something… But what? When I asked my mom she suggested for the thousandth time that I make my mac & cheese... Oh how that big block of Cabot stared at me every time I went to grab an egg, or a celery stick, or a carrot … I decided to do it. I lifted cushions from my body, unwrapped myself from the blanket-burrito I had become and set off to work.

Once in the kitchen I started the job of shredding the cheese, quite a mindless task… So I decided to play music, Fiona Apple's new album Fetch the Bolt Cutters… And before long, all of the cheese was shredded... I filled a pot with water, put it on the stove to boil, and took the pasta out of the cabinet.

I started collecting my spices, got the milk out, warmed the milk, made the roux, added the milk, let it simmer, added the spices, added the cheese, drained and rinsed and added my elbow noodles, stirred and added to a baking dish. There were no bread crumbs, but fortunately, despite my brother's use of the cheddar for his sandwiches there was some left. I shredded it and added it atop my dish, placed it in the oven for an hour at 350 and took a breath. After all, that was a lot of work.

I returned to my couch cushion cave, and there, reviewed les verbes pronominaux before French class which was fast approaching. In fact, I forgot about the mac & cheese until I was halfway through my French test and the oven started to beep. I took Anna Marie with me on a journey from my kitchen counter (where I work) to the oven, took the dish out and stole a bite before returning to the test that I was quite frankly not doing great on.

Guide to the perfect s’more:

To achieve the perfect s’more you need to first take the graham cracker and whatever chocolate you have. Take either two or three pieces of the chocolate and put it on one of the graham crackers. Once you have this, you want to rest both sides of the graham crackers on the rocks next to the fire. This will heat your graham cracker up, and it will melt your chocolate to the perfect consistency and temperature by the time your marshmallow is done roasting. To roast your marshmallow you will want to place it on whatever spear or stick you’re using. (I recommend something smoother so the marshmallow slides off easier). You will find the coals of the fire (not the actual flames yet), and hold the mallow a couple inches above these coals, slowly turning it, so that it can evenly roast. Once the mallow has visibly changed color, and it is bubbling a little bit (only a little bit), you will then move the mallow to the flame. Make sure to turn the mallow so that it evenly roasts on each side. Don’t stop until the mallow is golden brown, and it is almost falling off the stick. A good way to test it is by touching the mallow, and if it still has some hold to it, then keep roasting it. Do not test it by tilting your stick, this might result in the mallow falling off and ruining it; I speak from experience. If the mallow has completed these tests, this means you have finished the roasting process. We’re almost to the end, don’t worry. You will then place the marshmallow on the side of the graham cracker with the chocolate, then take the other graham cracker and smush it onto the mallow, pull the stick away and release the mallow into the graham cracker sandwich. And voilȧ, you have the perfect s’more.

A Saturday afternoon: unsurprisingly I got up late again. It was very sunny out and the first thing I did was not to get up, but was to check what time it was.

Then, I unlocked my phone and opened the food delivery app to see what I can have for lunch. Not dumplings, I’m not in that mood. Pizza? Too many calories. I just had curry last night so I’m not having it again now. I am never good at making decisions so having too many choices can sometimes drive me crazy. After ten minutes, I finally decided to have fried rice but as soon as I clicked on the restaurant which I always ordered from, a line popped up, “you are not in the valid area”. I looked at my phone and sat up. I looked around and I realized I’m still in Lukas’s house. The app I was using was the app I always use in China.

Well, I still wanted to have fried rice so I went to the kitchen and took out the only two ingredients I needed in order to make fried rice, rice and eggs. I sprayed the pan and turned on the stove. Next, I cracked the eggs and mixed them while waiting for the pan to heat up. I didn’t fry them long because I will fry them again with the rice later so if I fry the egg too long it’ll be over cooked after I fried it with rice. After I took out the eggs, I started to fry the rice. When the rice got softer I put the eggs in and fried them together. Then, I put the fried rice into a bowl and started to eat. Fried rice is not hard; you basically just heat up rice with other ingredients. Egg fried rice is the first dish my mom taught me because it’s the easiest fried rice. Now, everytime I have egg fried rice it’ll remind me of the time when my parents were not at home and the only thing I knew how to make was egg fried rice.

It was so easy to make but so delicious.

Over the past few weeks, countless media outlets have offered lists of books to read, movies to watch, TV series to pick up, and music to listen to while we’re spending more time at home than ever before. Last month, Waring’s own Health Newsletter offered book recommendations from faculty and staff. The Writing Department would like to hear what you’re reading, watching, and listening to. What has been the most absorbing book you’ve read? The most escapist TV series? The most soothing music? Please write us a review of the most meaningful piece of cultural production you’ve consumed in the past month. Make sure to give us enough crunchy details to make us want to give it a try, and tell us why it’s been a life-saver for you. If we get enough responses, we’ll print a list of Waring Community Recommendations in next week’s newsletter. Oh, and we respectfully request: No “Tiger King.” We think we’ve heard enough about that already. 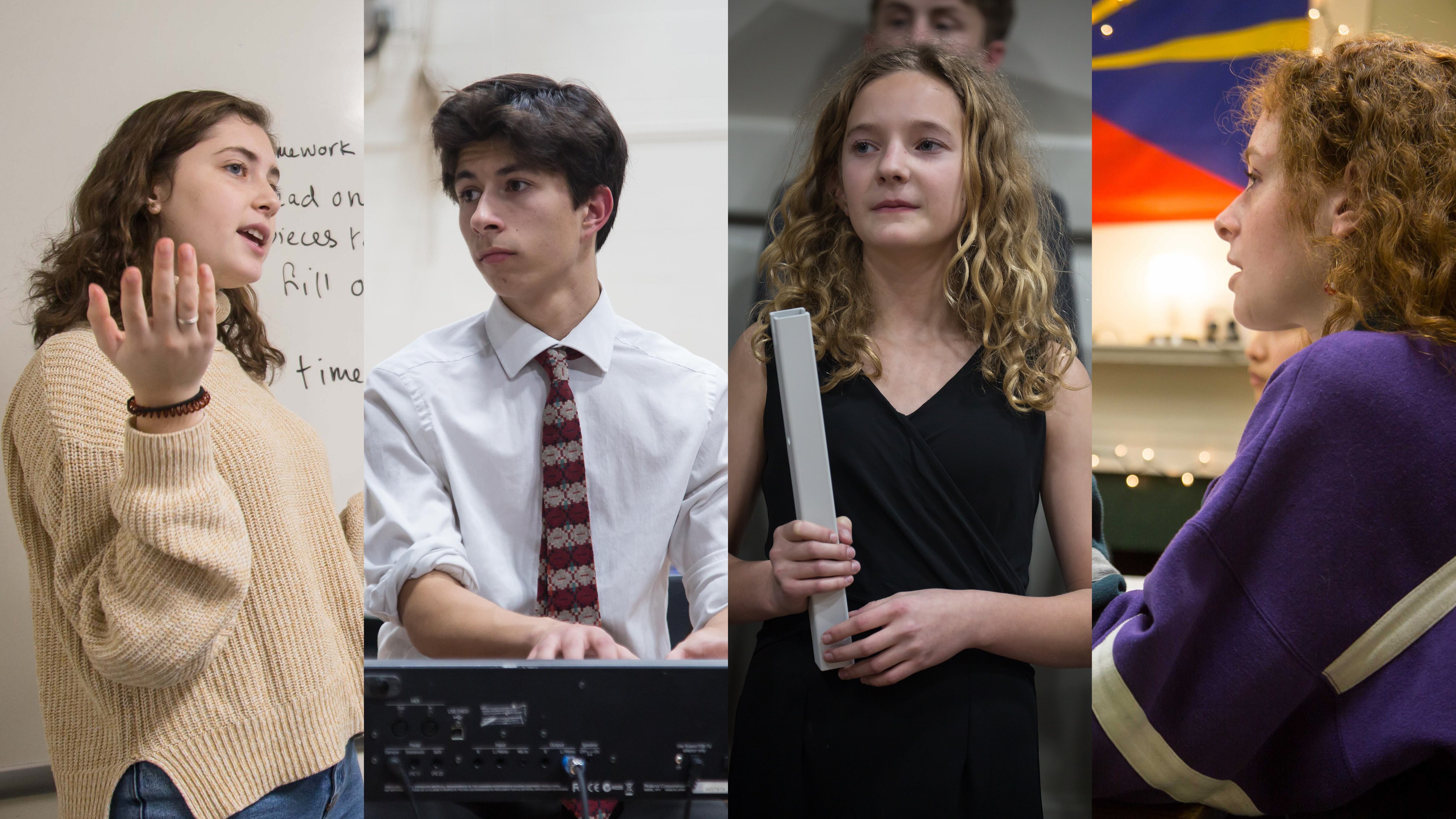