We have now just begun our official classes (what most schools would mark as the “start” of year), but we have also just come off a wonderful week at Northwoods Camp in Wolfeboro, New Hampshire. This journey into the outdoors is where the Waring year really begins.

Waring’s relationship with Northwoods YMCA Camp began in the mid ’80s. Several on the Faculty have attended over 25 trips to Lake Winnipesaukee, with veteran teacher Jim Watras, for example, holding a record of somewhere around 30 trips... including his years on sabbatical. This year, we are particularly grateful for teacher Edith Fouser, who, just returning from her own sabbatical, took on the role of lead organizer of the Camping Trip, facilitating a flawless schedule of events and promoting a culture of all hands on deck.

Waring’s Camping Trip is much more than a simple tradition. It is anything but perfunctory: each year, we revise the program, offering different outdoor experiences and setting a tone for a culture of student- and faculty-led experiences, mixed-age activities, discussions of summer readings, and an evolution of what will define that year for Waring School. The trip is an entrée into what we are and who we are in any given year. The students and faculty enjoy some continued traditions -- such as singing with inspirational song-leader, Nick Page, living in cabins as a Tutorial, eating meals all together, engaging in community service in Wolfeboro -- as well as creating spontaneous activities. The leadership of the Senior class becomes even more evident and powerful: this Class of 2019 set a tone of inclusion from the outset, leading us in all-school games on Tuesday, coordinating a Coffee House on Thursday night with an orientation toward full-school sing-alongs, and capping off the week with the ebullient traditions of Tutorial games.

But don’t take my word for it. Please hear the following words of Faculty and Staff who recently shared these souvenirs from last week:

Delighting in seeing the personal growth in some students that occurred over the summer, such as seeing a student who had been shy and reserved last year proudly greeting new students and acting as an ambassador: introducing them to others and making sure they had a place where to sit.

The joy of reading my cabin to sleep with stories from When the Sea Turned to Silver.

Group 1 went into Wolfeboro and interviewed residents about the upcoming elections: liberals, conservatives, undecided, and those that didn't even know that there was an election coming up. Group 1 also visited the Wright Museum, learning all about WWII, the homefront and the Pacific & European fronts. The docents at the museum were impressed with us. On the way home, some asked, "Can we keep doing this kind of hands-on learning?"

I smile to myself when I think about our Tutorial laughing and playing a fun fact-guessing game in the cabin while it rained - it was the best way to get to know each other!

Seeing John Wiggs walking quietly towards the lake upon his return from the Arctic with kids all running around the quad and him just taking it all in; and the standing ovation upon his return at Thursday’s dinner…

One image that sticks with me is a Group 3 student tearing up as I told her that she’d been chosen to do community service for the infants at the Wolfeboro Children’s Center. (When I asked her about it later, she said that working with infants is her “dream job” and that she’s been a mother’s helper since she was 8!)

I always love camping trip. Whether it's catching that North Woods sunset in the 5 minutes between dinner and Nick Page, whether it’s noticing how many more stars there are when you're really in the dark, whether it's cheering on the Cross-Country runners as they descend into Wolfeboro after 6.3 miles - I would happily exist on camping trip far beyond our short 4 day trip.

Listening to and watching our Tutorial’s senior earnestly guide her fellow tutees on their writing prompts in our cabin was a highlight for me.

Oh, how marvelous to work in a place that provides the space to be lying in the dark under a clear and expansive night sky, stargazing and pondering the immensity of our universe (and how small we are within it) with a thoughtful and articulate 7th grader. In that moment we are in it together, learning from each other and our rich, vast surroundings.

Theatre on Camping Trip this year felt particularly successful. We started with our seniors taking Senior Sports Option talking about their plans for the season, and also how they would still involve themselves in the fall play. [...] Yes it was hot as all get out, and there was rain, and when I looked at the kids on Thursday afternoon they had positively melted, but my takeaway is how welcoming our current students were to our new students. Having the luxury of time to explore craft, experiment, and get to know each other is really a gift. Our ensemble ebbs and flows over the course of a year, and it’s so gratifying to begin from such a place of warmth, strength, and shared vision.

Star-gazing with John Wiggs’ Tutorial: unforgettable! We had never seen so many shooting stars and our ages ranged from 12 to 45!

I was sitting in the dining area at night with our new calculus teacher, Anton. The door opened at the other end of the hall.  Anton asked, "what was that?"  I said, oh, just someone looking in, I guess. Anton was not satisfied with leaving the mystery unsolved. He walked to the end of the room then came back and said, "A skunk came in then left when it saw me. It was black and white; it had to be a skunk!" I replied, "Yes, but don’t you want to work on your Calculus?"

We lay on our backs and caught a shooting star. We sat up and read our fears out loud. We watched them curl in the flames until nothing was left but a single swoop of orange. Then that too disappeared like the Cheshire cat's smile.

We now venture into the equally exhilarating business of Waring’s “regular” class schedule. And yet, we carry the spirit of Northwoods in our every endeavor, each day adventuring, each day creating the experience of all voices… and of one Waring School. 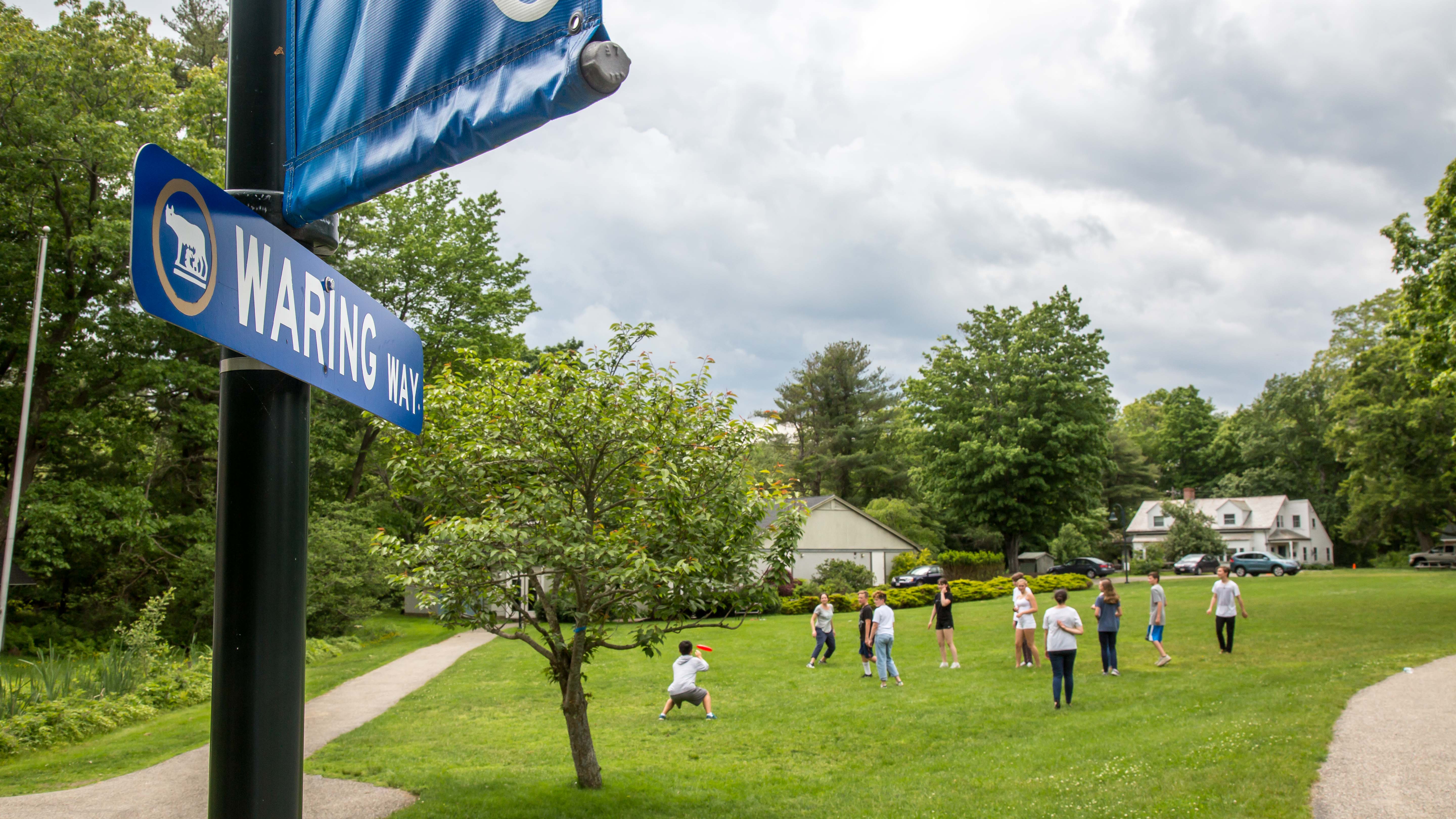 Waring School Teaching Pedagogy: the first in a series of articles by our teachers