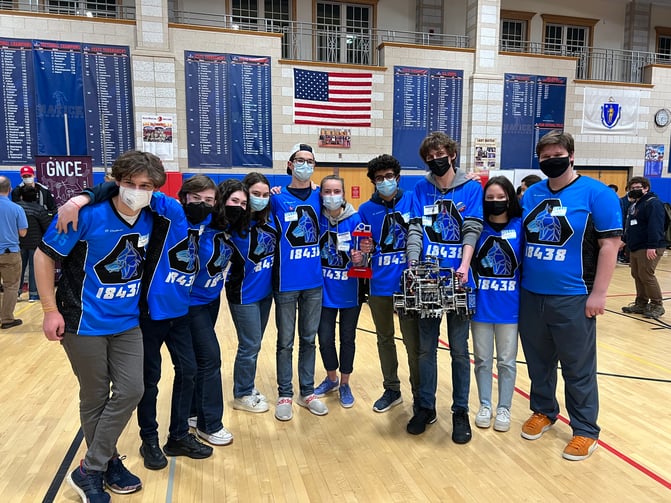 On Saturday, March 5 Wolfpack Machina won the Inspire Award, the top prize, at the Massachusetts FIRST Tech Challenge Championships and qualified to compete in the FIRST Championships, also known as Robotics Worlds, which will take place in Houston TX from April 19-23.
Wolfpack Machina is the varsity FIRST Tech Challenge (FTC) team of the Waring School, in Beverly MA.  They are a second-year FTC team, though many members of the team were on the two-time FIRST Lego League Massachusetts Championship team the Waring School Brickwolves.  Two years ago the Brickwolves won the right to go to worlds, but they were canceled due to COVID.  Last year to the members of the Brickwolves became an FTC team and formed Wolfpack Machina, Waring School's first high school robotics team.  Despite 2020-2021 being Wolfpack's first year in FTC they had the top two scores in the world out of the 5,000 FTC teams, being the only team to score over 700 points.  Sadly, for the second year in a row, they would have advanced to worlds, but the world champioships were canceled for the second year in a row.
After missing out on the chance to go to Worlds for two years, Wolfpack was hungry to try to earn the right to go to the 2021-2022 world tournament.  They set their sights on winning the MA State Championships months ago and worked toward that goal since the end of the previous season in June 2021.  In July and August 2021 members of Wolfpack taught FTC programming and design summer camps at Waring School so that they could pass on their knowledge.  The Waring School students who attended the summer camps formed Lupine Robotics, a new FTC team.  All year Wolfpack has been teaching Lupine all they know and helping them through their rookie FTC season.  Wolfpack also revived a community service program that had been put on ice during the worst of COVID, a robotics class they teach at Centerville Elementary School in Beverly MA.  Each school week members of Wolfpack and Lupine teach 3rd and 4th graders LEGO robotics using fun games and challenges.  (See attached Centerville picture)
Each year FTC teams need to build entirely new robots to deal with the new game challenge.  In September 2021 FIRST released the new rules for the new game.  Wolfpack set its sights on building a robot with a full suspension system so that it can cross the barrier that lies across this year's field.  After months of development and testing, the new suspension system was used on February 20, 2022 at the FTC qualifier that Wolfpack attended.  Other teams were wowed as Wolfpack's robot drove straight across the barrier at high speed, seemingly gliding over the rigid pipes sets into the competition floor, almost as if they were not there.  As a result, Wolfpack won the Inspire Award and First Alliance Captain, and therefore qualified for states, by winning both first and second place at the tournament. Lupine Robotics were delighted to learn that because Wolfpack won both the first and second place Lupine also advanced to the state tournament; despite being rookie's they were going to the state championships.
Over the two weeks before the State Tournament, held at Natick High School, on March 5, Wolfpack worked feverishly to rebuild damaged parts and to program new elements to its game.  (Attached find a picture of Wolfpack, lower left in blue, playing at a scrimmage.)
The day of the State Tournament arrived and Wolfpack and Lupine faced off against the best 32 robotics teams in Massachusetts.  Wolpack came out of the morning with the highest overall score and so won the right to choose its alliance partners for the afternoon's elimination rounds.  Having practiced together all year, Wolfpack chose Lupine, their former summer-camp students, to be one of their alliance partners.  Sadly, due to some mechanical and driver problems, Wolfpack's alliance was eliminated.  However, Wolfpack still held on to hope because they knew that they had a strong chance of winning the Inspire Award due to their strong summer camp program, excellent engineering documentation, innovative robot, community service program, work with local STEM professionals, and excellent control code for the robot.  Having lost the robot game, all Wolfpack could do was sit and wait through the entire awards ceremony, hoping that their team would get called at the end when the top prize was given.  As Wolfpack sat and suffered, Lupine learned to their delight that they had won the Control Award, the top prize for programming and control systems.  This is a huge achievement for a rookie team!  As the ceremony drew to a close, Wolfpack sat and waited, having won nothing.  Secretly their coach thought to himself, "either we win it all, or this is going to be the longest bus ride home ever."  Then, the MC announced Wolfpack had won!  The kids cheered as the captains of the team went to the judges to receive the big trophy.  Off to worlds!!!  Finally, after having worlds canceled out from under them for two years, they were getting to go back!  (see attached picture of kids with their robot, and Inspire Award Trophy).
Wolfpack is now busily preparing for Worlds.  New code needs to be written, new systems need to be brought on line.  The suspension needs tuning.  The list is long, but the work is joyful and spirits are high.  Wish us luck as we head to Houston to represent MA! 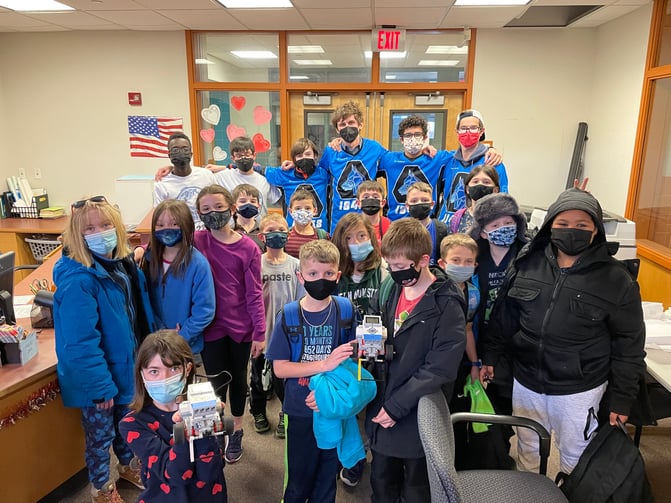 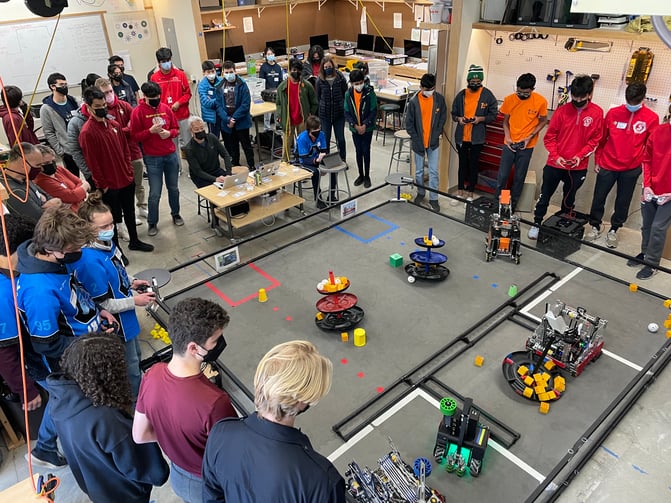 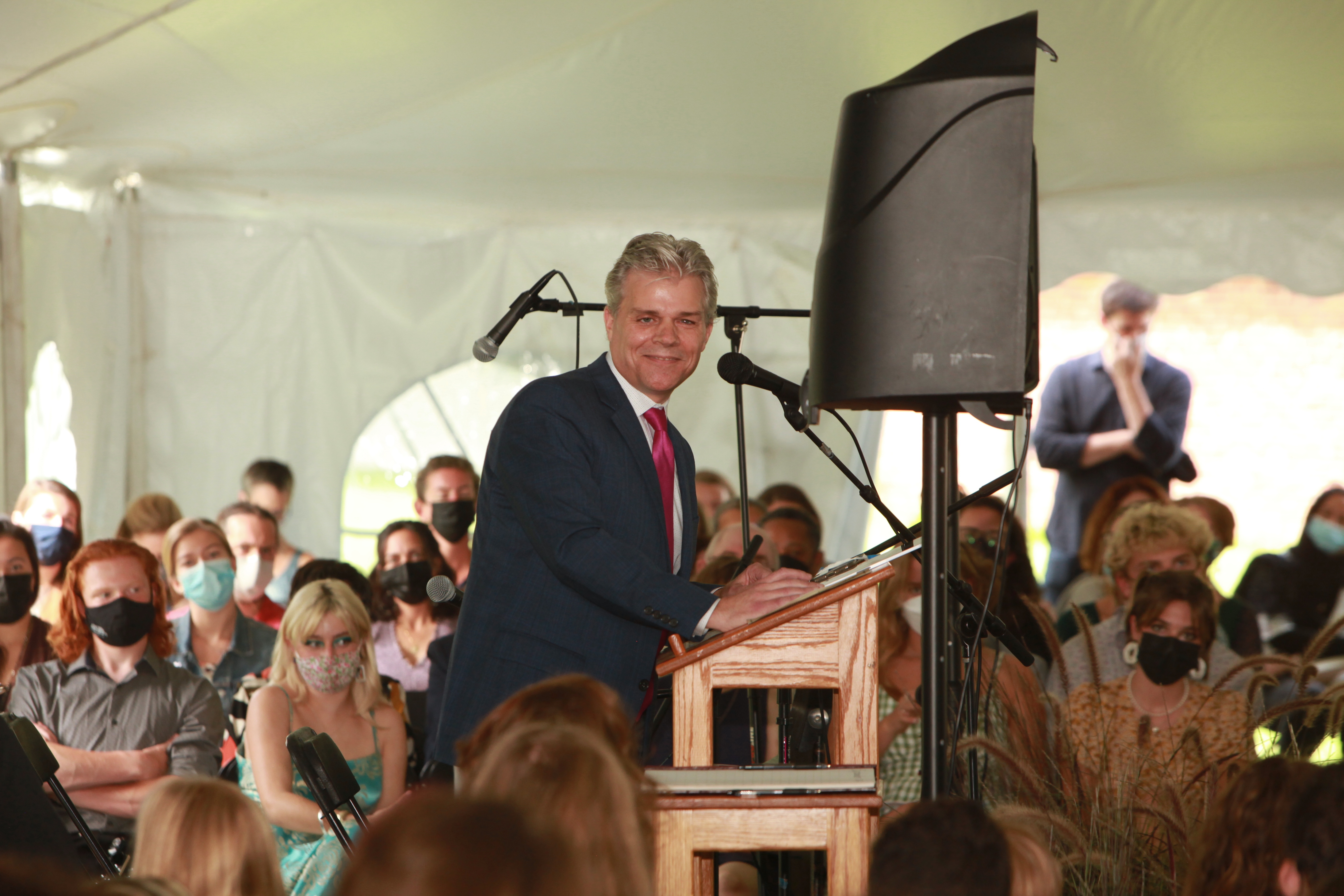 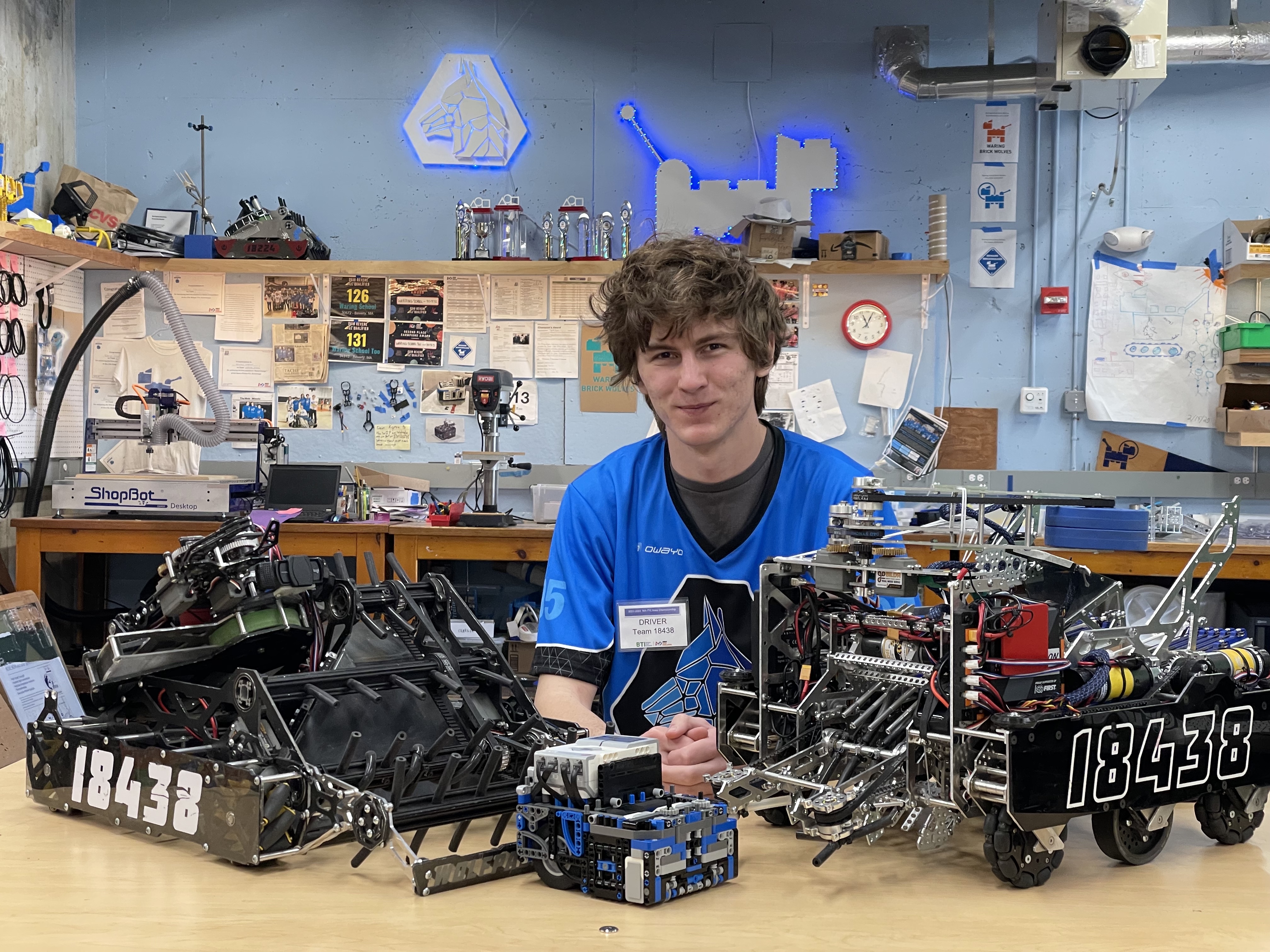