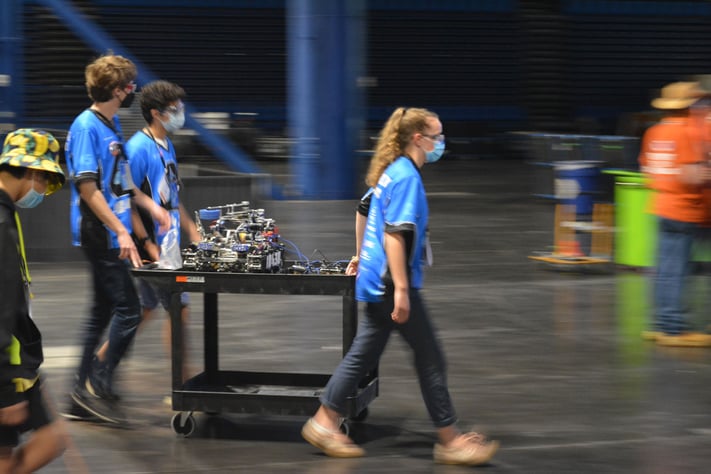 Wheeling out the robot.

During the trip, the Waring team had many wonderful interactions. Back home in Beverly, we were treated to nightly recaps of the action from Elana, mom to Alma, 11th grade. On Thursday, Elana wrote:

At the end of round 2 Wolfpack Machina was in 3rd Place. They then had a great third round, at the end of which they were in 4th place in the robot games. Then came Round 4—Wolfpack vaulted into First Place!

While the robot games are exciting, we know they are not the only factor that determines a Team’s success in this competition. Equally important is how the team does with the judges. Judges work in small groups with each group taking responsibility for a different aspect of a Team’s performance. After yesterday’s match, the Wolfpack pit was swarming with judges, who wear yellow T-shirts so they are easily identifiable. When a group of judges visits a Team’s pit, all the team members gather around. Francis instructed parents to stand back when the judges are present so I can’t report on what they are saying. But Francis says that the longer the judges stay at a pit, the better. I can report that the judges are spending a LOT of time at the Wolfpack Machina pit. I can also share that it seems as though those judges are engaging with each and every member of the team.

But it’s not just the judges who are swarming the Wolfpack pit. Members of competing teams and their faculty sponsors are regularly there. It seems they are all quite interested in the Wolfpack robot’s suspension. The Wolfpack team is asking people to sign a non-disclosure agreement before they share anything. I love listening to our team explain their reasons for doing this.

The Wolfpack pit was also visited today by Dean Kamen, the founder of the First organization. To say Dean is a rockstar at this event might be an understatement. The crowd swarming the Wolfpack pit during Dean’s visit swelled exponentially. It was quite a sight!


For me, this event has been a bit mind blowing. It’s hard to express how much admiration this team is receiving and how far reaching their accomplishments are recognized. The emcee at the robot games regularly reminds the crowd that teams at this competition come from 15 countries and 44 states! This is truly an international competition and everyone seems to know Wolfpack.

Another aspect of this event that has been especially meaningful for me has been the opportunity to spend time with other Waring parents. A topic that has come up repeatedly among the parents has been the value of the whole of the Waring experience to the success of the Wolfpack team at this event. I’m sure I don’t need to tell you what they’re talking about. But I want the faculty to know that they all have contributed to the success of this team. Wolfpack’s success is a powerful reflection of the education they have received at Waring, and the parents here know it. 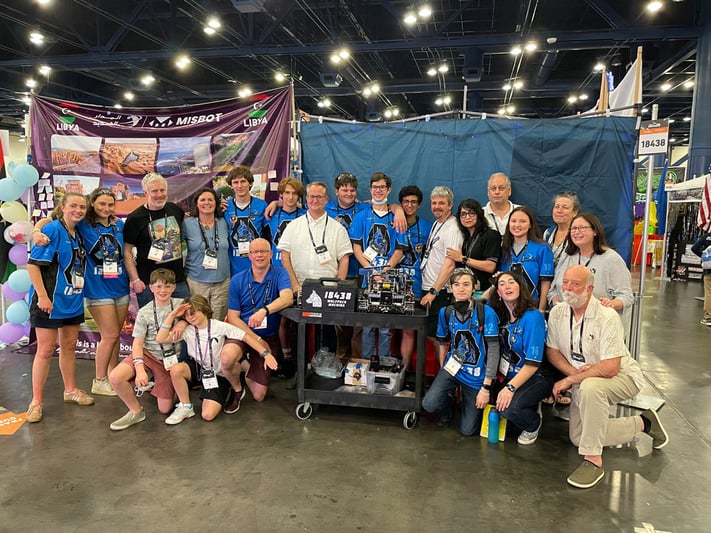 Wolfpack Machina and some of the family members who joined them.

Hundreds of people came to the team's booth to see the team's unique suspension system, which was invented by Owen Cooper, who is currently in the patent application process. Some of these visitors included music star, entrepreneur and supporter of many robotics teams will.i.am, entrepreneur and founder of FIRST Dean Kamen, and Deputy Dean of the Yale School of Engineering & Applied Science, Vincent Wilczynski.

The team worked extremely hard as they presented to round after round of judges, competed in robot games, fixed the robot and practiced with other teams late into the night. Collin Keegan, the team's lead programmer, received a special recognition from the software judges for the excellence of code and control systems that he created for the robot. The team also was a finalist for the Connect Award which recognizes the team's work with STEM experts. Thomas Davis, who led the team's outreach to STEM professionals was particularly pleased with this result (congrats Thomas!!).

Here are Elana’s notes from Friday:

Wolfpack competed in three rounds today, most of them early in the round. I can’t really recall what happened after each round. But I know they were struggling with their robot and I know they were not posting the scores they are capable of. I know there were tears of sadness and frustration. After their final match, Waring was in second place. Some of the parents knew which teams we needed to worry about and what scores would knock Waring out of the top four spots. There were two teams who could potentially post scores that would do this. Fortunately only one of those teams met that challenge so Waring finished in the #3 spot and earned their Alliance captain spot for the semifinals.

And then the best possible thing happened. The team had put a lot of time and energy into researching teams they felt would be their ideal Alliance partners. Being third to pick they weren’t at all sure they would get those teams, but they did! So going into the semifinals they have the exact partners they wanted! 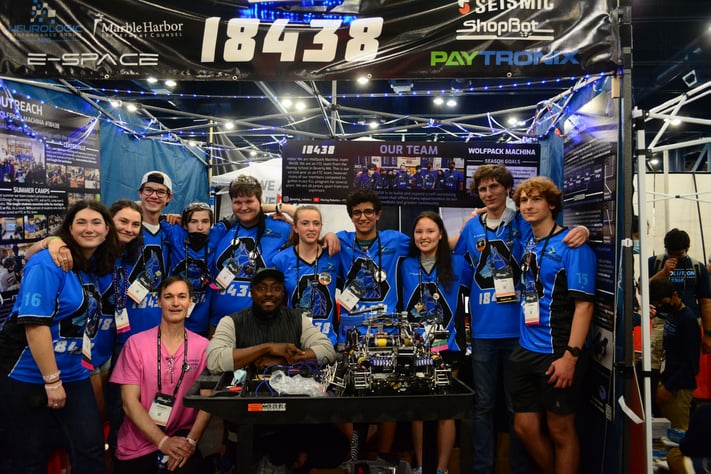 Then the team received their feedback sheet  from the judges on their initial judging session. They received the highest possible rating in EVERY.SINGLE.CATEGORY!! Wayne, the head coach for the State of MA who is here simply to support our team and who has 20+ years of experience with First, says he has never seen this.

Today I learned that each group of judges can recognize a student who has impressed them. This morning began with a group of judges approaching the Wolfpack pit to personally recognize Collin. Before I understood what was happening, I watched Collin’s teammates gather around, graciously thanking the judges for this moment of recognition and asking them to pose with Collin for photos. All the kids had their phones out. The joy was palpable!

Here’s how Francis explained this moment in his text:

“Something cool just happened. The judges who judge the quality, depth, and originality of software came by to give Collin an individual recognition for the quality of his software work. They only give this award to one student at the competition. So out of the 160 top FTC teams in the world Collin received the individual top programming prize. This is actually a very big deal. At the end of the little presentation where the judges gave him his pin, the judge said I’m gonna leave now before I start crying. It was beautiful.“

On the robot game front, as Elana writes, the team did very well. For the first two days the team was in first place in the qualification matches out of the 80 teams in their division. (The competition is divided into two randomly assigned divisions of 80 teams each.) In the official First video below you can watch the team set the world record high score.
By the end of the qualification matches Wolfpack was in third place. This high rank entitled the team to Captain an alliance as they went into elimination play. After selecting two partners to join their alliance, Wolfpack began elimination play. They won the semifinals of the elimination rounds, but then lost in the finals of their division. This is still an excellent result as it makes Wolfpack one of the four captains to make it this level in the tournament. This puts Wolfpack in the very top rank of the approximately 5,000 FTC teams in the world and is particularly noteworthy given that it is only Waring's second year in FTC.

The week was rewarding and exhausting. It was full of highs, such as the moment the team set a new world record - and lows. There were tears and there was joy, and not much sleep. The team now looks forward to its final tournament of the year, the prestigious Maryland Technical Invitational, to which the team has been invited. 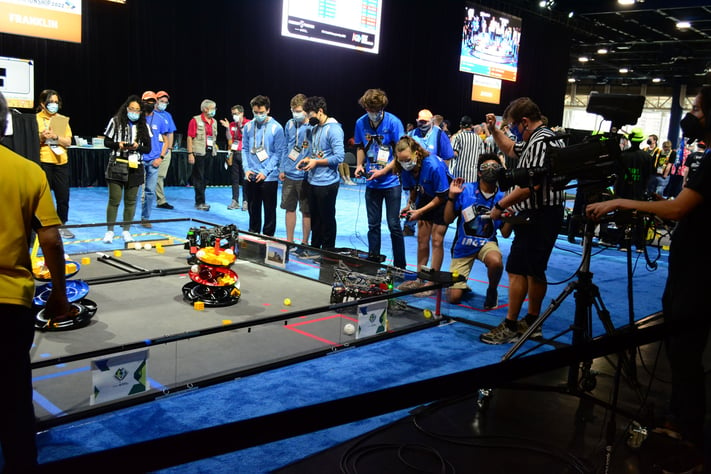 Thank you to Francis Schaeffer and Elana Peled, who wrote most of the text in this post, and to Francis, FIRST Robotics, and Greg Power for the photos and videos. 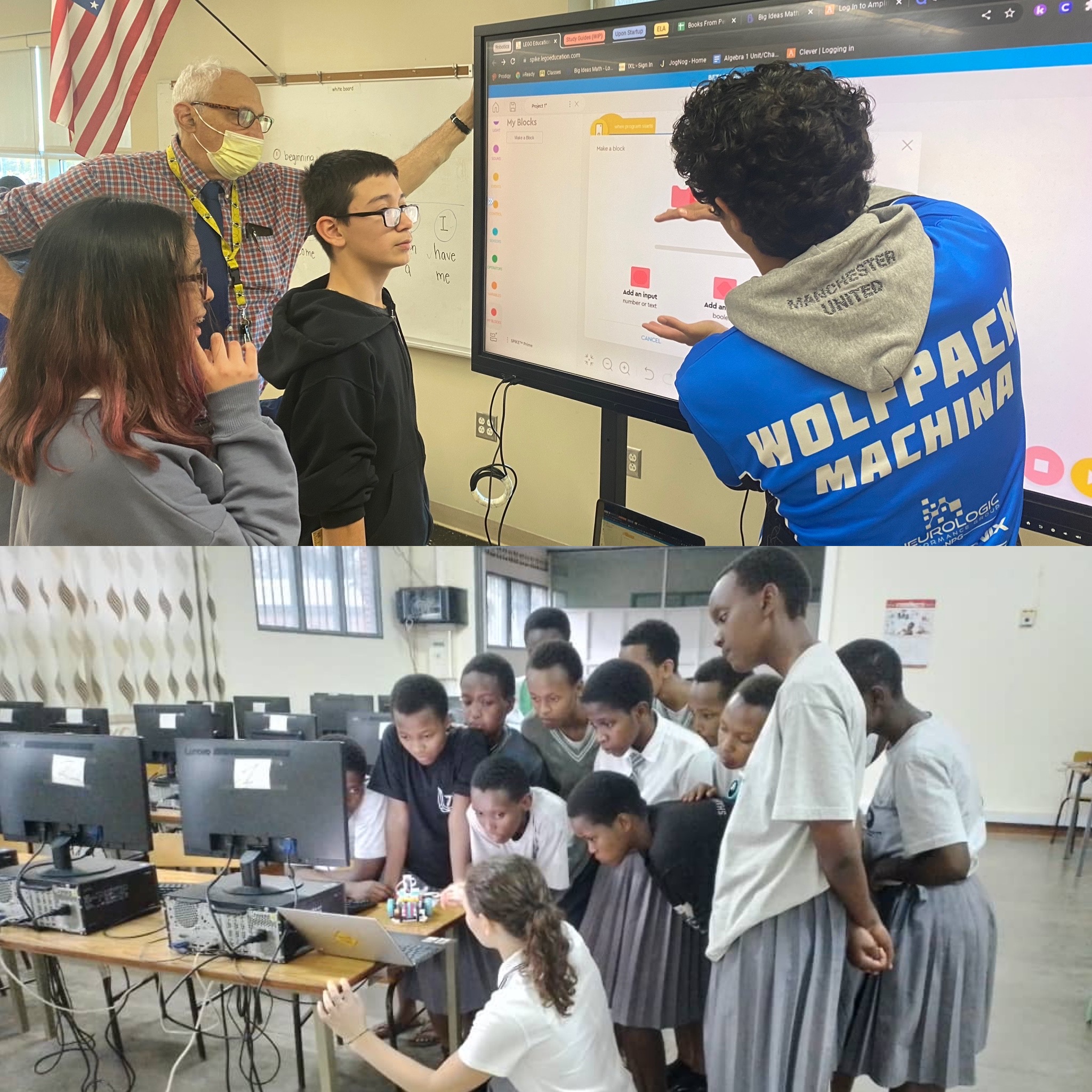