"[The act of watercoloring] made me wonder how this active demonstration would translate to mathematical problem solving and talking through worked out examples this way on a white board."

At Waring, we as faculty members are (as Philip Waring used to say) “paid learners,” curious and engaged - whether it's asking questions of a presenting student in All-School Meeting, or consulting with Rich about the plants in our own backyards, or visiting one another's classrooms out of a pure curiosity to learn. We don’t have the opportunity to do this in a formal way very often. So this year during the June faculty meetings, there were four faculty workshops offered by teachers for teachers - putting four Paid Learners in charge of their colleagues, and the rest of us in the roles of student. 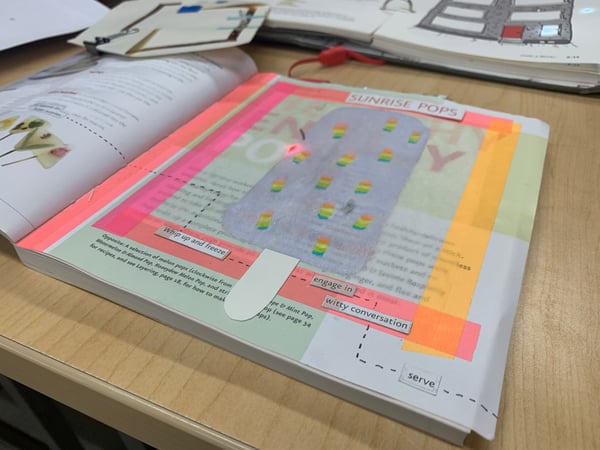 Sarah Carlson-Lier led an activity making paper circuits in the Waring Industrial Park. Anton Fleissner led an activity on ancient Latin and Greek. Rich Stomberg taught a workshop in the Greenhouse on cutting and re-planting existing plants, and Stéphanie Williams and Edith Fouser engaged a group in the Atelier on contour drawings and watercolor painting. The rest of the staff and faculty chose an activity to attend and played the role of student for those 45 minutes.

In the true spirit of experiential learning (rather than just hands-on learning) we not only experience, but we build off of and engage with that experience afterwards. Here are some reactions from the students in those classes -

From Maureen Gedney: "To be near Rich as he talks about plants is to be in the presence of someone who just shines with excitement about what he loves, and who explains with both simplicity and extreme knowledge what it takes to take care of or propagate plants. He spurts out unpronounceable names of plants as if they are all his best friends. There is a loving familiarity with how he touches each plant, how he masterfully yanks it out of a pot, pulls it apart without hesitation to reveal too you with a huge grin that you now have two plants! There is the amazing papyrus plant. You can make a cutting and simply plop it upside down in water, and the leaves will grow roots and create a new plant. And why is this, you ask? Because the papyrus is native to the Nile in Egypt. When the Nile floods each year and covers the plants with water and mud, it has to survive and so developed this unique way to propagate. Eight or so colleagues watched with rapt attention as Rich went from one plant to the other sharing it’s little secrets, then made our own cuttings and repottings before leaving with some of Rich's special glow of excitement on our faces."

From Graham Pearsall: "Rich is like a mad scientist in the greenhouse–bouncing from plant to plant, tearing off shoots, ripping apart roots, flinging soil and water everywhere. His enthusiasm for plants and teaching is obvious, and it was so much fun to be a part of his world for a short time."

From Landi Van Alen: "Rich's plant class was interesting and fun. We learned about splitting plants into cuttings and how to plant them. Rich is extremely knowledgeable and it was great to see his passion for plants shine through during this activity." 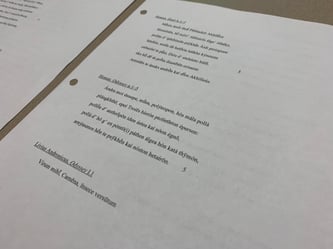 From Anton Fleissner: "I was very pleasantly surprised to see my activity pretty well-attended by a variety of departments (math/science, music, French, humanities, administrative, health--it was like Star Trek!) and a variety of walks of life (Bonnie was very familiar with epics from childhood and Gallaudet had just taught some of these epics, whereas others had no familiarity at all). We spent our time on the opening lines of the Iliad and the Aeneid; I read aloud the Greek for the sake of the pitch accent, and we all practiced reading the Latin to hear the same metrical structure. In addition to looking at the syllable-based meter of the Latin, we scoured the Greek word by word for derivatives and cognates, which we were able to find in most of the words. With a word-by-word gloss and a proper translation, it was also possible to appreciate the word order of each language in their unusual flexibility for poetry's sake. Our colleagues were great, wanting to hear the sounds and notice their features as well as try out some recitation themselves. The highlights I was most glad to see were (1) seeking out cognates in nearly every word of Greek, with the result that we could see a little more how deep our linguistic heritage goes, and (2) again, that the diversity of departments and levels of familiarity led to some very fruitful discussion of texts and languages unseen." 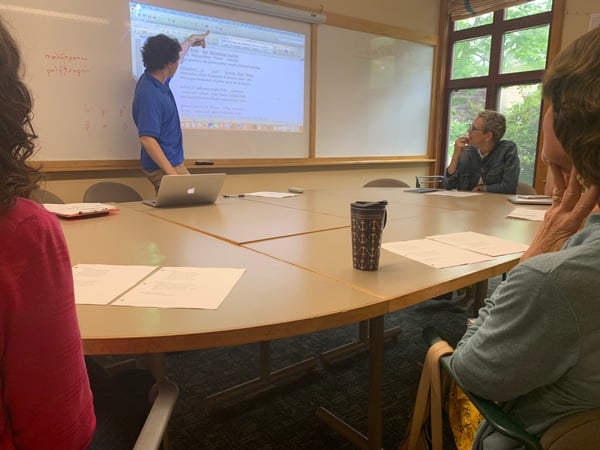 From Gallaudet Howard: "I had no idea Latin, when pronounced properly, sounded like Italian--but Anton opened up a whole world for me, with that and with his parsing of the Ancient Greek openings of The Iliad and The Odyssey."

From Francis Schaeffer: "Sarah led an activity on making paper circuits. It was a lot of fun to build the circuits and the activity resulted in Josh, and other teachers, saying that they would want to run an activity like this one as part of their writing classes. Josh also invited Sarah and I to come the humanities department meeting to present ideas for activities to the department. We just had that meeting, which went very well. I am hopeful that many more classes will be coming to the WIP to use the facilities."

From Jackie Cooper: "As an administrative person it was so nice to get into the WIP and learn about circuits/coding and be able to use the facilities in the lab. Our students are so lucky to have such an amazing facility available to them." 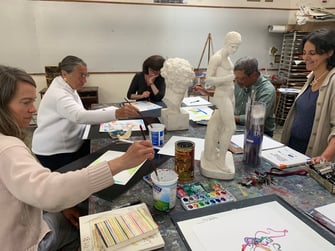 From Joan Sullivan: "The 45 minutes of "doing art" with Stephanie and Edith provided me with a wonderful brain break in the middle of meetings week, but also a window into how art is taught here at Waring. We drew and watercolored. I learned the power of using a pen and not to worry about making a "mistake."  Stephanie's demonstration of blind contour drawings gave me much to think about regarding my own practice. She talked out loud as she did the exercise, explaining what she was thinking. What felt different from the sorts of "worked out examples" I do in my own teaching practice is that we students were all gathered around a table with her, leaning into her work to see and listen to what she was saying. It made me wonder how this active demonstration would translate to mathematical problem solving and talking through worked out examples this way on a white board. Similarly, Edith demonstrated observational drawing and journaling. Lots of possible connections, laughs, and learning." 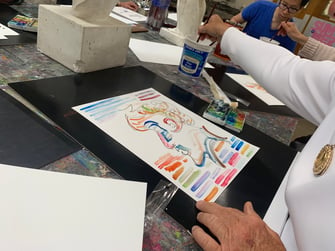 In learning from their colleagues, our teachers were able not only to learn about a specific subject - plant re-potting or ancient Greek text - they were able to make connections to how they teach in their own classrooms, in some cases in very different subject areas. Having gone through the experience of learning from each other in a more formal way, our teachers will be able to enhance their practice - in and out of the classroom. 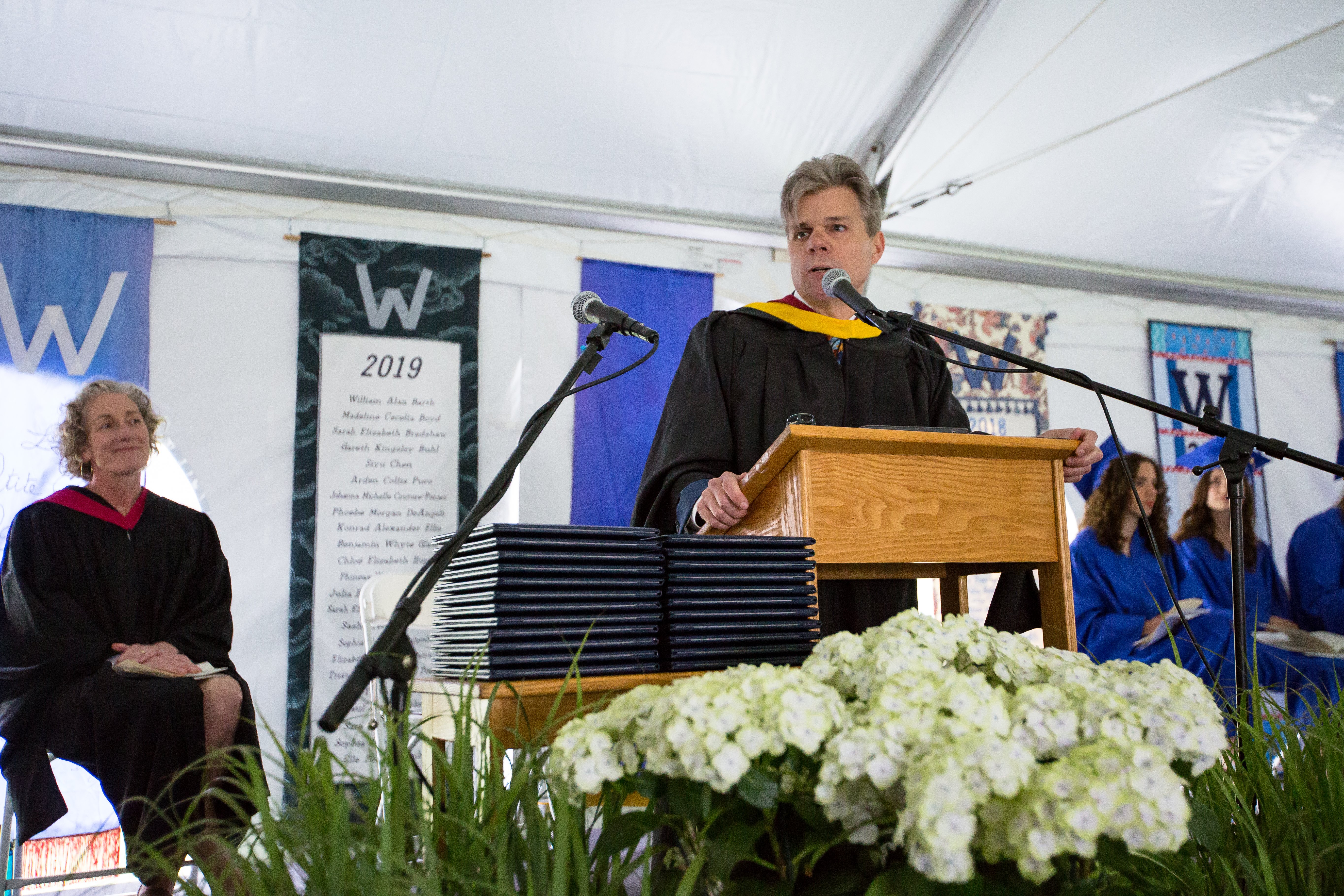 Photographing the Italian Dolomites on a Waring Faculty Grant